For most of us, the printer has become a staple of everyday life. People of all ages seem to have a need for the printer, whether it be a young student printing out a school paper or a businessman getting his documents ready for an important meeting. However, what people don’t seem to think about is where the printer comes from. The printer has had a long and interesting history of printing, ever since its inception in Asia.

A note of paper money during the Song dynasty

In the fifteenth century, the Chinese Song dynasty developed the concept of printing paper money while other nations were still using coins at the time. The money, called Jaozi, was the first paper money to be used as a widely-circulated national currency. Factories were set up around the country devoted to producing the money, and at one point over 1,500,000 notes were printed by each factory. The success of paper money in the Song dynasty would go on to inspire other dynasties. In later history, dynasties such as the Yuan, Ming, and Qing would opt for paper money as well. 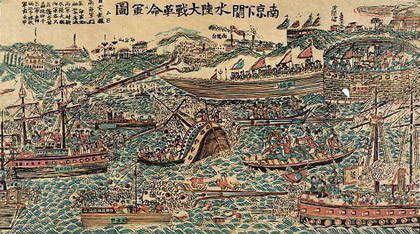 The battle of Talas River

The History of Printing Continues

One legend states that the secrets of printing paper escaped out of China and into the rest of the Western world during the battle of Talas River. The battle arose out of a dispute between China and the Abbasid empire in the Middle East, and it ended with a victory for the Muslims. The stories say that two Chinese prisoners who were captured during the battle spilled the secrets of printmaking- and while this legend may not be true, it is known that Samarkand became the first city in history outside of the Chinese sphere of influence to own a paper mill.

The World of Western Printing

Thanks to trade between the Middle East and Europe, printing technology soon spread to the Western World. The first man to make a significant leap in Western printing was Johannes Gutenberg. Gutenberg was known as the father of modern printing. He created the printing press, a machine that used movable type to imprint letters on paper. Gutenberg demonstrated the superiority of his printing press technology by printing out a high quality Bible at low cost. With the advent of the printing press, books no longer had to be copied by hand onto paper.

The printing press soon led to the Protestant Reformation as well. Martin Luther, a priest discontented with the corruption in the Catholic Church at the time, started spreading his ideas through the printing press. He became excommunicated after he stapled 95 of the issues he took with the Vatican onto a church door in Wurttemberg. Indeed, after using the printing press to preach to the masses, Martin Luther managed to translate the Bible into German for the first time. In those days, the Catholic Church had a monopoly on the production of Bibles. The Bibles were produced predominately in Latin. Thanks to Martin Luther, the German Bible soon became mass printed. The Scripture was available for the common people of Germany.

Throughout the years, technological advancements helped the printer to grow and develop, until it became the widely used invention that it is today. Without the inception of the printer it would be safe to say that today’s world would be far less convenient.